Electric lemon, fits right in with the other liberal wonder, suicide clown cars, they come as their own hearse.

There is an old saying used by engineers, “just because you can doesn’t mean you should” — And it primarily applies to those who design and then try to produce ridiculous, expensive, Rube Goldberg inventions. And G.M.s Electric Lemon qualifies, dead center. Years ago, the car guy press said dumb idea, really need some batteries which are better than what technology could produce.

And where does the recharge electricity come from, the magic house recharger wall, that’s where. Pay no attention to the coal fired power plant behind the wall.

A car with no market … The technology is not there, and may never be, for battery cars that can be used for anything but transporting golfers around the course. From the New York Times no less “GM’s Electric Lemon”:

For starters, G.M.’s vision turned into a car that costs $41,000 before relevant tax breaks … but after billions of dollars of government loans and grants for the Volt’s development and production. And instead of the sleek coupe of 2007, it looks suspiciously similar to a Toyota Prius. It also requires premium gasoline, seats only four people (the battery runs down the center of the car, preventing a rear bench) and has less head and leg room than the $17,000 Chevrolet Cruze, which is more or less the non-electric version of the Volt.

In short, the Volt appears to be exactly the kind of green-at-all-costs car that some opponents of the bailout feared the government might order G.M. to build. Unfortunately for this theory, G.M. was already committed to the Volt when it entered bankruptcy. And though President Obama’s task force reported in 2009 that the Volt “will likely be too expensive to be commercially successful in the short term,” it didn’t cancel the project.

Liberals, dumb at all costs, no matter what it costs you. They think they can change everything with their good intentions and lies.

The WSJ took a whack at the lunacy, actually trying to use one of these idiots nonsensical wonders, and found it wanting.

Comments Off on Taxpayers Foot Bill For G.M.’s Electric Lemon |

Where Did The Oil Go ?

Start with the notion put forth by BP former CEO Hayward, the leaking oil is light sweet crude, it will mostly evaporate. Not the bunker crude that was in the Exxon Valdez, After the laughing stopped, the geologist Hayward just shrugged, he got fired and the oil evaporated.

Where did the oil go? Maybe it did evaporate, or at least most of it did:

Since BP capped the renegade Macondo well at the center of the Gulf oil disaster 12 days ago, the oil slick has shrunk to about 10,000 square miles from 80,000 square miles in just a matter of weeks.The reduction has amazed scientists who are tracking the spill and raised many questions about where all the oil has gone.

Amazed? Scientists? Say what? Mother nature, other wise known as God if you aren’t a liberal works in strange ways. And yes sometimes the geologists do know what is going on, and not the regime stooges.

It’s too bad it got away, light sweet crude is the highest priced refinery grade oil there is.

Comments Off on Where Did The Oil Go ? |

Economy headed south for the winter. Malaise takes over!!! Liberals in charge. Welcome back Carter. 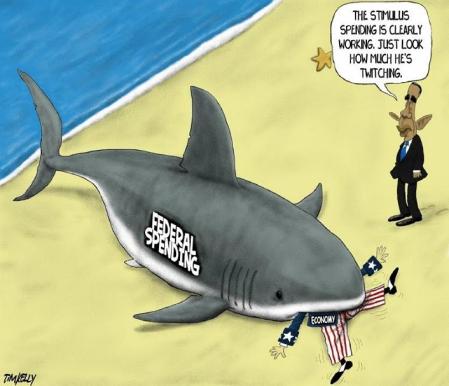 The U.S. economic recovery will remain slow deep into next year, held back by shoppers reluctant to spend and employers hesitant to hire, according to an Associated Press survey of leading economists. The latest quarterly Economy Survey shows economists have turned gloomier in the past three months. They foresee weaker growth and higher unemployment than they did before.

I often wonder why liberal Chicago, and liberal Detroit look the way they do… And then of course there is always the African economies, which don’t exist.

And then of course, the Porkulus money has run out, and the States are in worse shape than ever … Only way to fix is to take a weed-whacker to State salaries and pensions, neither of which is sustainable.

Comments Off on Economy Sinks, Under New Taxes And Regulations |

Our mulatto President decides to go on the View, because Michelle actually watches it, and acts stupidly about race once again:

The president appeared on ABC’s morning talk show “The View” Thursday, where he talked about the forced resignation of Agriculture Department official Shirley Sherrod, his experience with race and his roots.

When asked about his background, which includes a black father and white mother, Obama said of African-Americans: “We are sort of a mongrel people.”

“I mean we’re all kinds of mixed up,” Obama said. “That’s actually true of white people as well, but we just know more about it.

Mongrels are mixed breed dogs, so is Obama calling blacks dogs? What if Bush had called black people ‘mongrels’? What would the media do?

Will we have another White House beer summit, perhaps with Joe ‘bite me’ white guy?

Who Is The Felon?

This picture was made to deliver the sob story that an unemployed woman needed benefits extension. But there was a problem. You see the woman was fired for prescription fraud at the drugstore where she used to work. Does she know? Even better, does he know and if not why not? Does this seem presidential?

Local Woman Convicted of Drug Fraud Joins Obama at the Podium –President Barack Obama posed with a Charlottesville woman at a White House event on July 19. What we didn’t know – and what the White House may not have known – is that court records show she’s been found guilty of prescription drug fraud.

Charlottesville resident Leslie Macko was once employed at ACAC in the Albemarle Square Shopping Center. In April 2009, she lost her job as an aesthetician in the spa at ACAC.

Comments Off on Who Is The Felon? |

So much for transparency. And isn’t this swell. Are there any jounolists left?

Under a little-noticed provision of the recently passed financial-reform legislation, the Securities and Exchange Commission no longer has to comply with virtually all requests for information releases from the public, including those filed under the Freedom of Information Act.

The law, signed last week by President Obama, exempts the SEC from disclosing records or information derived from “surveillance, risk assessments, or other regulatory and oversight activities.” Given that the SEC is a regulatory body, the provision covers almost every action by the agency, lawyers say. Congress and federal agencies can request information, but the public cannot.

That argument comes despite the President saying that one of the cornerstones of the sweeping new legislation was more transparent financial markets. Indeed, in touting the new law, Obama specifically said it would “increase transparency in financial dealings.”

The SEC cited the new law Tuesday in a FOIA action brought by FOX Business Network. Steven Mintz, founding partner of law firm Mintz & Gold LLC in New York, lamented what he described as “the backroom deal that was cut between Congress and the SEC to keep the  SEC’s failures secret. The only losers here are the American public.”

Comments Off on Thanks Scott Brown: SEC Says New FinReg Law Exempts It From Public Disclosure |

Once again, Fox News is finishing the month with the top 10 programs on cable news – in both total viewers and the A25-54 demographic. FNC also was 3rd on all of cable in prime time (total viewers), with MSNBC 28th, CNN 32nd and HLN 35th. Here are more details from July 2010:

Comments Off on FNC Cleans Up The Cable News Sweepstakes |

Fox News reports that “the DISCLOSE Act appears to stand no chance of passage this session” now that the Republican senators deemed most likely to support the bill, Maine’s Olympia Snow and Susan Collins, have announced their opposition. And to really rub it in, the AFL-CIO officially turned against the bill today:

William Samuel, director of the union’s government affairs department, makes clear in a strongly-worded statement to members that though the AFL-CIO opposes the measure “reluctantly,” it nevertheless feels the bill “imposes extraordinary new, costly, and impractical record-keeping and reporting obligations on thousands of labor (and other non-profit) organizations,” adding that the bill “would disrupt the operation of thousands of organizations without any corresponding public benefit.”

The group’s index of consumer attitudes fell to 50.4 in July from an upwardly revised 54.3 in June, below the median forecast of 51.

Comments Off on Consumer Confidence Falls, Lowest Since February 2010 |

This comes from a fascinating article in the latest issue of Foreign Affairs, “CastroCare in Crisis,” by Laurie Garrett of the Council on Foreign Relations. It’s not news that the Castro brothers profit from medical tourism. Michael Moore infamously shilled for the enterprising Havana Hospital in his movie SiCKO, where he brought 9/11 Ground Zero rescue workers to be treated. The Havana Hospital appears to be a more competitive, patient-centered enterprise than any American general hospital I’ve seen: It posts prices for its services, reports testimonials, and can schedule surgeries on short notice (three days for open-heart surgery)!

Comments Off on Castro Care In Crisis |