“We are grateful to the millions of customers who purchased the Kindle Fire and Kindle e-reader devices this holiday season, making Kindle our bestselling product across both the U.S. and Europe,” said Amazon CEO and founder Jeff Bezos. “Our millions of third-party sellers had a tremendous holiday season with 65% unit growth and now represent 36% of total units sold.”

END_OF_DOCUMENT_TOKEN_TO_BE_REPLACED

All That Gains, Falls — The monster January 2012 rally comes to a halt.

U.S. consumer confidence as measured by the Conference Board declined to 61.1 in January, missing economist projections for a gain.

Economists polled by Bloomberg were expecting the figure to rise to 68.0, from an upwardly revised reading of 64.8 in December.

Retreat — Instead, it fell 3.7 points, as both future and present confidence indexes descended.

“Consumer Confidence retreated in January, after large back-to-back gains in the final two months of 2011,” Director of the Conference Board Lynn Franco said. “Consumers’ assessment of current business and labor market conditions turned more downbeat and is back to November 2011 levels. Regarding the short-term outlook, consumers are more upbeat about employment, but less optimistic about business conditions and their income prospects.”

The number of consumers who said that business conditions were good, declined to 13.3 percent from 16.3 percent. At the same time, Americans said it was harder to get a job in January.

Comments Off on UH OH, Sound Retreat: US Consumer Confidence Tumbles To 61.1 In January |

It’s how Communist deal with markets, remind you of anyone?

Chinese asset values have not yet crashed across the board, but the buying of gold—a leading indicator of panic—is an especially troubling sign that they will.  Therefore, it is not surprising that gold purchases by Chinese citizens and investors are frightening Beijing’s technocrats.  At the end of last month, December,  they shotdown all of the countries gold exchanges other than two of them in Shanghai.

HONG KONG (MarketWatch) — China’s central bank has ordered all gold exchanges, apart from the official exchange in Shanghai, to cease operations, according to a statement Tuesday. Unauthorized gold exchanges and related trading platforms have sprung up around the country as bullion prices soared, often operated by institutions or individuals, according to the state-run Xinhua news agency, which cited a statement posted on the People’s Bank of China website. The statement cited inadequate management, irregular activities and evidence of illegal activity as risks that were behind its decision to impose the ban. The Pboc reportedly said it plans to work with the Shanghai Gold Exchange and the Shanghai Futures Exchange to help foster the development of the nation’s gold market…

Why Are the Chinese Buying Record Quantities of Gold?

Makes you want to go hmmmm….

This month, the Hong Kong Census and Statistics Department reportedthat China imported 102,779 kilograms of gold from Hong Kong in November, an increase from October’s 86,299 kilograms.  Beijing does not release gold trade figures, so for this and other reasons the Hong Kong numbers are considered the best indication of China’s gold imports.

Analysts believe China bought as much as 490 tons of gold in 2011, double the estimated 245 tons in 2010.  “The thing that’s caught people’s minds is the massive increase in Chinese buying,” remarked Ross Norman of Sharps Pixley, a London gold brokerage, this month.

So who in China is buying all this gold?

The People’s Bank of China, the central bank, has been hinting that it is purchasing.  “No asset is safe now,” said the PBOC’s Zhang Jianhua at the end of last month.  “The only choice to hedge risks is to hold hard currency—gold.”  He also said it was smart strategy to buy on market dips.  Analysts naturally jumped on his comment as proof that China, the world’s fifth-largest holder of the metal, is in the market for more.

There are a few problems with this conclusion.  First, the Chinese government rarely benefits others—and hurts itself—by telegraphing its short-term investment strategies.

Second, the central bank has less purchasing power these days.  China’s foreign reserves declined in Q4 2011, falling $20.6 billion from Q3.  The first quarterly outflow since 1998 was not large, but the trend was troubling.  The reserves declined a stunning $92.7 billion in November and December.

Third, the purchase of gold would be especially risky for the central bank, which is already insolvent from a balance sheet point of view.  The PBOC needs income-producing assets in order to meet its obligations on the debt incurred to buy foreign exchange, so the holding of gold only complicates its funding operations.  This is not to say the bank never buys gold—it obviously does—but there are real constraints on its ability to purchase assets that do not provide current income.

Apart from China’s central bank, there is not much demand from the country’s institutional investors for gold.  There are industrial users, of course, but their demand is filled from domestic production—China is the world’s largest gold producer.  Most of China’s gold demand from foreign sources, therefore, is from individuals.

Comments Off on Why Are the Chinese Buying Record Quantities of Gold? |

The Yutes Spell Out Tha Problem

As for overall unemployment…

Comments Off on The Yutes Spell Out Tha Problem | 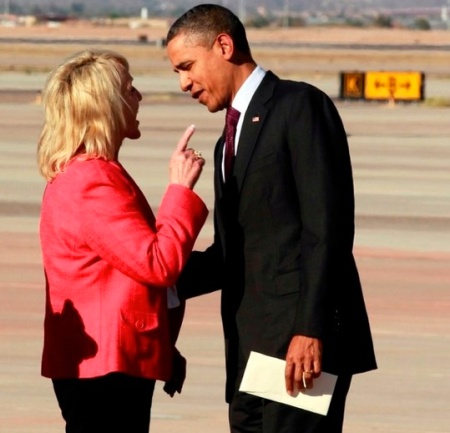 President Barack Obama touched down on the tarmac on Wednesday, and no sooner than he stepped off Air Force One into the warm embrace of the Arizona sun did Gov. Jan Brewer get in his face.

Here’s what we know: Brewer reportedly handed Obama a letter requesting an official meeting about his administration’s handling of illegal immigration. The president then informed her that the last time they met in the Oval Office she had improperly recounted the story in her book, “Scorpions for Breakfast,” in which she criticized Obama for opposing her state’s controversial “Show Me Your Papers” law. Brewer then launched into a bit of a tirade and wagged her finger at the president.

Ahh .. Here is the Zombies

Comments Off on Teh Narrative #Occupy Zombies “revived !!!!!” |