Remember when Bush tried to reform Social Security, and the donks jumped all over him for scare mongering? Well the scare mongerel is now at the door … One of the many features of Obammunism and his shutting down the US economy. We should be proud we have national health care rationing. And a federal government bankrupt and too big too fail.

To see how the negative trend has accelerated, consider the same figures for the first half of 2009: Social Security tax receipts were $366.0 billion and Social Security benefits payments were $334.3 billion. A positive cash flow of $31.7 billion has disappeared in the course of just 12 months. Scary.

Read more at the Washington Examiner:

How To Recognize — EPIC FAIL ?

Caracas stocks reached a record 52 week high on essentially very little volume, as financial stocks rose, but the absence of most brokers after the largest and most important were taken over by the government has ground activity to a halt, making specific changes in prices essentially irrelevant.

Volume was so low that just a few thousand dollars were traded all week for any local issue.

Any similarity to Obammunsim is purely accidental.

Comments Off on How To Recognize — EPIC FAIL ? |

Margaret Thatcher, in a television interview for Thames TV This Week on February 5, 1976. Prime Minister Thatcher said, “…and Socialist governments traditionally do make a financial mess. They [socialists] always run out of other people’s money. It’s quite a characteristic of them.”

It has been popularly paraphrased in various forms:

Comments Off on Greece: First To Prove Thatcher’s Saying |

The Biggest Fraud Ever: In Broad Daylight

An analysis from an objective source — Medicare’s actuary — says ObamaCare will increase costs and relies on projected savings that may be unrealistic. Now isn’t that a surprise?

The Obama administration has been trying hard to find good news in a new report by government experts on the outlook for the health care economy, now at 17% of GDP and continuing to climb.

To HHS Secretary Kathleen Sebelius, the analysis confirms that “the Affordable Health Care Act will cover more Americans and strengthen Medicare by cracking down on waste, fraud and abuse.”

More neutral observers will notice that the administration no longer talks about “bending the cost curve” in health care. The analysis released last week by Medicare’s Office of the Actuary tells why. It looks ahead 10 years and reaches two conclusions about the new health care overhaul: More people will be covered, and costs will continue to soar. The cost curve is unbending still.

Chief Actuary Richard Foster pegs ObamaCare’s added costs (that is, beyond what was projected without the overhaul in effect) at $311 billion over 10 years. That’s just under 1% of overall expected health care spending, and administration officials are calling that sum a small price to pay for adding 34 million Americans to public or private insurance rolls.

But the president had set a goal of extending coverage without adding any new cost. More to the point, the problem of runaway costs that plagued the pre-overhaul health care system has not been solved. As Foster points out, much of what ObamaCare proposes to reduce the nation’s health tab, especially in Medicare, is politically unrealistic.

The overhaul projects a net decrease in projected Medicare spending (more accurately, a reduction in future spending increases) of more than $400 billion. But Congress has talked this way before and has been notably timid about pulling the trigger.

Under a 1997 law, for instance, a 21% cut in Medicare reimbursements to physicians was supposed to go into effect on April 1. But Congress two weeks later put the cut on hold as part of a bill to extend unemployment benefits. As usual, mobilized doctors and frightened seniors got their way.

This pattern of avoiding politically difficult spending cuts has been going on pretty much since the start of Medicare. ObamaCare promises that this behavior will somehow change. That would be a miracle, and actuaries tend to stick with more mundane probabilities.

Comments Off on The Biggest Fraud Ever: In Broad Daylight |

Just like Hugo Chavez with his rigged up authoritarian ‘democracy’ run by his very own ‘Chicago thugs’. At least that is how he sees it — I suspect America has a slightly differing view of tyranny and tyrants. 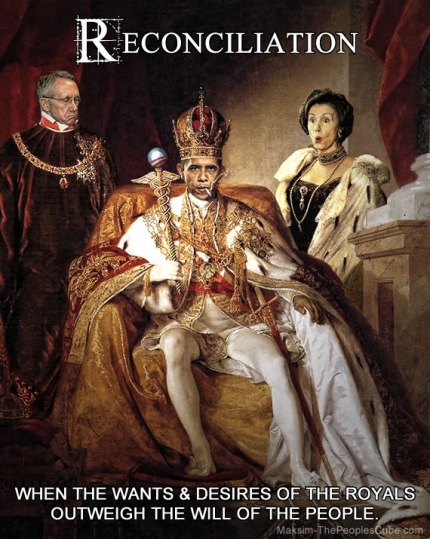 And what exactly do you think they want as many socialist Mexicans for?

If I were “The Royals” I would take some time out and read the Declaration of Independence.

Comments Off on Obama: King For Life ? |

CATO has a summary of how reconciliation works, and doesn’t work.

On Sunday’s Face The Nation with Kent Conrad, more trouble showed up.

Since Republicans now hold 41 votes in the 100-seat chamber following Scott Brown’s victory in Massachusetts last month, reconciliation appears to be on the radar for many Democrats. But the prospect has drawn fierce debate among Democrats and Republicans, as was evident during Sunday’s “Face the Nation.”

Democratic Sen. Kent Conrad (N.D.), chairman of the Senate Budget Committee, defended the possible use of reconciliation by saying that the procedure would only be used for “minor” issues with the bill.

“Reconciliation cannot be used to pass comprehensive health care reform,” he told host Bob Schieffer. “It won’t work because it was never designed for that kind of significant legislation; it was designed for deficit reduction.”

Conrad said the role played by reconciliation in health care reform “would be very limited. It would be on sidecar issues designed to improve what passed the Senate and what would have to pass the House for health care reform to move forward.”

Conrad said that owing to the Byrd rule, which states that non-budgetary sections of a bill must be removed before consideration, major portions of the legislation would need to be jettisoned. “That would eliminate all the delivery system reform, all the insurance market reform, all of those things the experts tell us are really the most important parts of this bill. … The only possible role that I can see for reconciliation would be to make modest changes in the major package to improve affordability, to deal with what share of Medicaid expansion the federal government pays, those kinds of issues, which is the traditional role for reconciliation in health care,”

Comments Off on Recinciliation: Non-Starter |

Just 6% of Americans believe the $787 “porkulus slush fund” boondoggle created or saved any jobs according to a recent New York Times/CBS poll.

Comments Off on Obama, Epic FAIL |

The European Commission has ordered Greece to slash public spending and spell out details of its austerity plan within “one month”, invoking sweeping new EU Treaty powers to impose a radical shake-up of the Greek economy.

Next up is Portugal, with a debt to GDP of about 67%. The EU welfare states are beginning to buckle under their socialist debt loads, they have all run out of other people’s money to give away.

END_OF_DOCUMENT_TOKEN_TO_BE_REPLACED

Comments Off on Greece Under EU Protectorate |

All this after the BLS revised their charts to try and obscure the facts … It started January 1, 2010. How unexpected that the data would be revised, re-tabulated and reformatted while at the same time showing unemployment was magically decreasing.

Well, this looks like a snow job: Unexpectedly — The Labor Department said Thursday morning that seasonally adjusted initial claims came in at 480,000 for the week ended Jan. 30, an increase of 8,000 from the previous week’s revised figure of 472,000. Economists were looking for a decrease of about 10,000.

The yearly update, expected to be about 824,000 jobs according to the BLS, is due Friday.

Democratic leaders in the House of Representatives are counting on new budget deficit curbs to help smooth the way for a bill allowing the government to go $1.9 trillion deeper into debt over the next year — or about $6,000 more for every U.S. resident.

The debt measure set for a House vote Thursday would raise the cap on federal borrowing to $14.3 trillion. That’s enough to keep Congress from having to vote again before the November elections on an issue that is feeding a sense among voters that the government is spending too much and putting future generations under a mountain of debt to do it.

The Senate held their vote, before Scott Brown was sworn in, to avoid the messy Senate filibuster. Yes Sen Kirk the illegal appointed Senator voted. Brown is now scheduled to be swork in today, after the Democrats have delayed as long as possible.

Already, the accumulated debt amounts to $40,000 per person. And the debt is increasingly held by foreign nations such as China. Hard to get tough with your enemies when they can just jerk your debt chain and yell heal.

Comments Off on Debt Vote Thursday |