Obozo Has A Plan For Your Internet: Tax It, Limit Use and Censor It, Just Like They Do In Red China

Democrats, if it moves TAX IT.

The Obama administration has a plan to expand online innovation and boost national public safety. And it wants to do it with more taxes and higher fees.

The massive national broadband plan the Federal Communications Commission released last month proposes creating a national framework for the taxation of digital goods and services and imposing a fee to establish and maintain a national public safety wireless broadband network.

The FCC says the national tax would eliminate the headaches that come with varying state and local taxes on digital goods and services. And the public safety network would help avoid the communication failures among first responders to the Sept. 11 terrorist attacks and Hurricanes Katrina and Rita.

But the proposals are already drawing fierce criticism.

Where exactly in the Constitution is the power to regulate the Internet?

Comments Off on Obozo Has A Plan For Your Internet: Tax It, Limit Use and Censor It, Just Like They Do In Red China |

4 Supreme Court Cases Define What IS Meant In The U.S. Constitution By “natural born citizen”

The Supreme Court of the United States has given the definition of what a “natural born citizen” is.  Since being a natural born citizen is an objective qualification and requirement of office for the U.S. President, it is important for all U.S. Citizens to understand what this term means.

It’s not just having been born in a US Hospital that qualifies said person as “Natural Born Citizen” of the USA, the Constitutional qualification provision is specifically designed to exclude for instance, someone of Kenyan descent from fathering a child, and that USA born child qualifying as a “Natural Born Citizen”. The terms “natives” and “natural born citizens” are obviously English terms; used to render the idea conveyed by the French phrase “les naturels, ou indigenes”: but both referred to the same category of citizen:  one born in the country, of parents who were citizens of that country.

END_OF_DOCUMENT_TOKEN_TO_BE_REPLACED

Comments Off on 4 Supreme Court Cases Define What IS Meant In The U.S. Constitution By “natural born citizen” |

Happy Birthday George, And Thanks 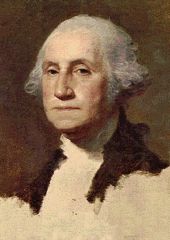 Comments Off on Happy Birthday George, And Thanks |

News and politics, US Constitution |

Obama Doesn’t Get America: Consent Of The Governed

I suppose that spending America into oblivion is not what Americans want.

From the Declaration of Independence: That to secure these rights, Governments are instituted among Men, deriving their just powers from the consent of the governed, — That whenever any Form of Government becomes destructive of these ends, it is the Right of the People to alter or to abolish it, and to institute new Government, laying its foundation on such principles and organizing its powers in such form, as to them shall seem most likely to effect their Safety and Happiness.

I doubt they taught that in Kenya or Indonesia.

We need to re-establish the U.S. Constitution as the supreme law of our land.

News and politics, US Constitution | Tagged: consent of the governed |

Why You’ve Never Heard of the Great Depression of 1920

The recession lasted from January 1920 to July 1921, or 18 months, according to the National Bureau of Economic Research. Though long by modern standards, this was shorter than recessions from 1910-12 and 1913-1914 (24 and 23 months respectively) and significantly shorter than the Great Depression (43 months). Estimates for the decline in Gross National Product also vary. The U.S. Department of Commerce estimates GNP declined 6.9%, Nathan Balke and Robert J. Gordon estimate a decline of 3.5%, and Christina Romer estimates a decline of 2.4%. There is no formal definition of economic depression, but two informal rules are a 10% decline in GDP or a recession lasting more than three years.

Video presented by Thomas E. Woods, Jr., at “The Great Depression: What We Can Learn From It Today,” the Mises Circle in Colorado; sponsored by Limited Government Forum of Colorado Springs and hosted by the Ludwig von Mises Institute. Recorded Saturday, 4 April 2009.

His book “Meltdown” is a must read … All fixed by private sector.

1930s depression, made much worse by Fascist FDR.

The US Constitution: Founding Fathers

The best way to decide what the US Constitution meant, ask the Founding Fathers. It is through reading these quotes of significance, primarily surrounding the Bill of Rights and the construction and writing of the US Constitution can you determine that over the stretches of time. The progressives like to say, oh that’s outdated, you can’t apply that to modern times, when in fact, freedom and liberty are timeless quantities …

END_OF_DOCUMENT_TOKEN_TO_BE_REPLACED

Comments Off on The US Constitution: Founding Fathers |

With the Chicago gun ban case the 14th Amendment moves to center stage. The lead attorney in the Supreme Court case of McDonald v. Chicago is Alan Gura. He did an excellent job in District of Columbia v. Heller, so the new case is in very good hands.

The question presented in McDonald v. Chicago is:

“Whether the Second Amendment is incorporated into the Due Process Clause or the Privileges or Immunities Clause of the Fourteenth Amendment so as to be applicable to the States, thereby invalidating ordinances prohibiting possession of handguns in the home.”

That the Justices framed their questions to inquire about incorporation through the Privileges or Immunities Clause, this is really interesting. Do they have plans, maybe.

But starting in 1897, the high court has undergone a piecemeal process of incorporating various parts of the Bill of Rights. Today’s gun right’s cases are asking the justices to extend the federally protected Second Amendment right to keep and bear arms to the States

The 14th Amendment language closely tracked the existing Article IV original language in the Privileges and Immunities Clause. In Congressional discussions of the Joint Committee of Fifteen, on February 28, 1966, Congressman Bingham expressed his opinion that this draft language would give Congress power to “secure to the citizens of each State all the privileges and immunities of citizens of the United States in the several States,” and he added that, “The proposition pending before the House is simply a proposition to arm the Congress…with the power to enforce the bill of rights as it stands in the constitution today. It hath that extent—no more … If the State laws do not interfere, those immunities follow under the Constitution.”

END_OF_DOCUMENT_TOKEN_TO_BE_REPLACED

Comments Off on 14th Amendment |