Who would ever trust this bunch of liars again???

The real bananas step forward … Got to pass it to see what’s in it, next time lets read it first.

END_OF_DOCUMENT_TOKEN_TO_BE_REPLACED

FOR GOVERNMENT OFFICIALS, as the let them eat cake crowd, tries to keep the people down. Just shut up!!!

$5.25m For Senate Hair Care & 21 Other Ways Politicians Are Living The High Life At Your Expense

At this point, more than half of those “serving the American people” in Congress are millionaires.

Hey it’s just taxpayers money, we can always print more if we run out… END_OF_DOCUMENT_TOKEN_TO_BE_REPLACED

Comments Off on Living The High Life … |

Especially when they do a blunder as bad as Obamacare is. They will never tell you the truth.

It’s now got a name “the Obamacare effect”.

During the NBC Nightly News segment last week(video) about one of the unintended consequences of the Affordable Care Act (ACA), Lisa Myers reported speaking with “almost 20 small businesses and other entities around the country” and that “almost all said that because of the new law, they’d be cutting back hours for some employees.

” But the Obama administration doesn’t see why there’s such a fuss.  The White House dismisses these examples as “anecdotal.” The president’s top economic adviser [CEA Chair Jason Furman] told us “he sees no systematic evidence the health care law is having an adverse impact on the number of hours employees are working.”

So, should we take our government’s word and dismiss the examples as anecdotal?

While many Wall Street economists and strategists shrugged in the face of tin-foil-hat-wearing bloggers who suggested the disaster that is the part-time jobs receovery was due to The Affordable Care Act – of 953,000 jobs created In 2013, 77%, or 731,000 are part-time – epitomized best by Larry Kudlow and Deutsche Bank’s ever-smiling Joe Lavorgna; it seems the drag on employers’ hiring has now hit the mainstream media.

As NBC Nightly News reports in this succinct clip, things are not going according to plan for the President’s better bargain even as Fed’s Bullard proclaims “clear improvement in labor markets.” Perhaps he should watch TV this evening?

Little kiddies — They are mortgaging your future.

How Does This Happen

Where are they hiding the expenses : MYSTERY: Nation’s Debt Unchanged – for 87th Straight Day?!

How do you do this, unless you have the Fed ( money printing ) helping you to disguise the truth. How do you print in the dark?

Comments Off on How Does This Happen |

Why The TBAC Is Suddenly Very Worried About Market Liquidity

Perhaps the best source of real, actionable financial information, at least as sourced by Wall Street itself, comes in the form of the appendix to the quarterly Treasury Borrowing Advisory Committee (TBAC, aka the Goldman-JPM chaired supercommittee that really runs the world) presentation published as part of the Treasury’s refunding data dump. These have informed us in the past about Goldman’s view on floaters, as well as Credit Suisse’s view on the massive and deteriorating shortage across “high quality collateral.” This quarter was no different, only this time the indirect author of  the TBAC’s section on fixed-income market liquidity was none other than Citi’s Matt King, whose style is well known to all who frequent these pages simply because we cover his reports consistently. The topic: liquidity. Or rather the absolute lack thereof, despite what the HFT lobby would like.

Did You Forget About This???

DODD-FRANK REGULATIONS ALREADY 15 MILLION WORDS: Davis Polk, a Wall Street law firm, released a report on Friday that found that what has been written so far “is equal to 42 words of regulations for every single word of the already hefty law, spanning 848 pages itself.” In addition, “the work implementing the law is just 39 percent complete.”

Business crippling laws that no ones reads… have to be passed before you know what is in them … By the same the very same people who brought you the housing collapse. You remember the no money down, no verifiable income people, who told you everyone deserves a house.

Comments Off on Did You Forget About This??? |

Photo Album From The “Main Streets” Of A Dead City 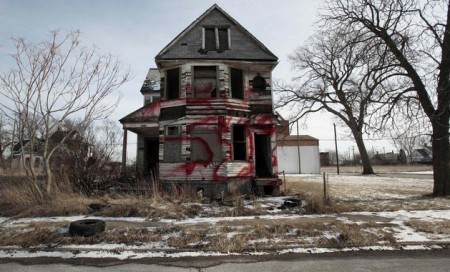 A vacant and blighted home, covered with red spray paint, sits alone in an east side neighborhood once full of homes in Detroit, Michigan January 27, 2013. The story of Detroit’s decline is decades old: Its tax revenue and population have shrunk and labor costs have remained out of whack. Picture taken January 27, 2013.

Congress: “Is it fair to say that Wall Street has benefited more [from QE] than Main Street has?”

Bernanke: “I don’t think so… I want to emphasize that we’re very focused on Main Street… Our low interest rates have created a lot of ability to buy automobiles…”

As if buying cars, an economy doesn’t make …

Criticizes filing for ‘not honoring the president’…

Will Not Sell Howdy Doody…